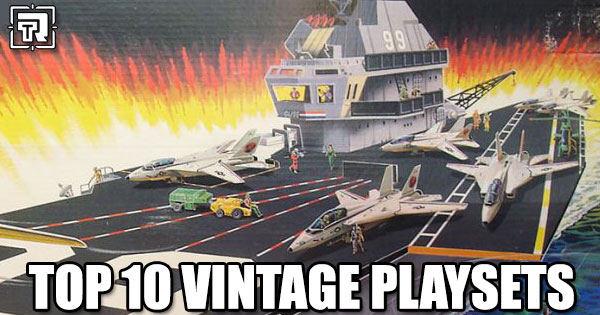 Well, it is here. We have danced around the issue for some time but we have finally gathered our own Top 10 Playsets list. In some ways, this is really a sad list. The big toy companies rarely do this anymore. Where is the Starkiller Base from The Force Awakens? We certainly had the figures and ships for one, but alas no toy. Where are the in-depth headquarters and evil layers that all toys need? Mattel, a couple of years ago created a Bat Cave for Batman v Superman, but to find one for a reasonable price became a whole other issue. As you will see on this list, everybody back in the day made giant playsets. They were the culmination of many collections and the centerpiece to them as well. Here is our Top 10 Vintage Playsets", best of luck as you go hunting for them.

Property: Voltron
Awesome Special Feature: King Alfor’s Ghostly Image.
By: Ponosh Palace
Originally just the lions were released as toys. They became Voltron just as quick as your little brother became a Robeast. This was fun until you formed Voltron then whoever was the black lion got to control everything. When they finally released figures that went into lions it changed things up a bit and this castle for the heroes was perfect. Reminiscent of Castle Grayskull, only cheerier, it was equipped with weapons, a shuttle, and even a ghost. It does look like it is right out of Disney World but it opened the door to further Voltron adventures.

Property: Marvel Superheroes Secret Wars
Awesome Special Feature: Working Trap Door
By: Mattel
All right, so looking back now the idea seems pretty idiotic. A supreme being named the Beyonder summons Earth’s heroes and villains to slug it out while offering the victor their heart’s desire. The concept was unique for Marvel at the time. Bring characters together in one book for one ultimate team up. Action figures were the next logical step. Though many of the Marvel Superhero Figures didn’t even participate in the Secret War (Ice Man, Daredevil, and Hobgoblin), this was the first time many had figures made since the Mego days. There aren’t many Marvel playsets, to begin with, and this has to be one of the first for their 3.75-inch action figures. All hail Doom!

8. Planet of the Apes Fortress

Property: Planet of the Apes
Awesome Special Feature: Detention Pen
By: Mego
There are a lot of Planet of the Apes toys that were either for the films or the short-lived TV series. Any fan of Planet of the Apes won’t care because these original toys outshine the re-imagined Tim Burton ones. The apes’ Fortress may be made out of a lot of cardboard however it evokes that classic caveman future we were all introduced to back in 1968. It’s crazy, fun and even comes with a detention pen. Its size is also another key factor in placing it on the list. A fortress should be something to behold. Since it is designed for Mego figures this playset lives up to its name.

Property: M.AS.K.
Awesome Special Feature: Giant Rolling Boulder
By: Kenner
M.A.S.K. (Mobile Armored Strike Kommand) was an awesome toy line in the eighties, despite its miniature size. If only they would have been the same size as G.I. Joe figures there could have been some great cross-overs in the backyard. Kenner pulled out all the stops on this playset and actually made this gas station/ fortress compatible with many of the M.A.S.K. toys. Condor and Gator could easily fit into the Boulder Hill. The additional two action figures (Alex Sector and Buddy Hawks) made Boulder Hill an essential toy for the series right behind Rhino. Being a fan of the bad guys on the show I always loved it when someone brought out Boulder Hill. You knew exactly where they were going to be; allowing you to set up your attack run.

Property: Dungeons & Dragons
Awesome Special Feature: Moving Spike Wall
By: LJN Toys
Didn’t expect to see this one on the list did you? Dungeons & Dragons originally was a fantasy game to be played by 10 to 18-year-old boys. There were books, maps, and cards that enabled you to live out the adventures in the D&D realm. This was the eighties and of course, there was a cartoon spin-off and figures. The figures were a crazy assortment of warlords, monsters, and heroes but the playsets were few and far between. More often not the good guys got a base or a bunker. Not the case here. The Fortress of Fangs is a perfectly twisted and evil hideout for villains to lure in heroes. Tuck this baby away somewhere in your backyard and the adventure gets much bigger as if you were marching to your own doom.

Property: Teenage Mutant Ninja Turtles
Awesome Special Feature: Tunnel Spiked Ball (to pummel foes)
By: Playmates
Every TMNT adventure started and ended with the Turtles sewer lair. Playmates were wise in thinking that kids would want this as a playset. Complete with multiple levels, telephone poles to swing from, a punching bag for training and the secret fire hydrant telescope made it a must-have. Splinter’s bed was also a nice feature but it was the details that really made it come to life.

Property: G.I. Joe
Awesome Special Feature: Firebat
By: Hasbro
Finally, after all those years of attacking the G.I. Joe headquarters Cobra had a place to call their very own. What I loved about the design of this headquarters was its “circle the wagons” approach to defense. It was ready on all sides and armed to the teeth. Though the coup de gráce for the playset, in trumping the G.I. Joe headquarters was the Firebat. It would launch right from the Cobra’s mouth and annihilate those unsuspecting Joes. It was bigger than most coffee tables and the true gem of all the Cobra toys.

Property: Star Wars
Awesome Special Feature: Dianoga
By: Kenner
You knew it was going to be on here and you knew it was going to be in the top 5. If you have never seen one in person, rest assured they are an awesome site. At the International Toy Fair one year in New York I was fortunate enough to get an invite to the Hasbro panel, a three-hour discussion on all their toys for the coming year (yeah, it was rough). The only Star Wars question I had for Hasbro was, “where is the Death Star?” Their answer wasn’t surprising and met with a room full of groans. As much as they would like to do it it’s just not feasible that it would be profitable. Until they wise up there is always one on eBay.

Property: He-Man and the Masters of the Universe
Awesome Special Feature: Monorail System
By: Mattel
What no Castle Grayskull or Snake Mountain? Sorry, they easily get replaced by the Eternia playset. It was the biggest playset set ever produced by Mattel for the Masters of the Universe line. Complete with three towers, three levels and a vehicle that ran on a monorail it was the end all be all of the MOTU. To have this back then meant you were lucky. To have this now means you are the ultimate fan. It comes with a huge assortment of weapons to rearm your MOTU figures but better yet, it is a world to play in. Castle Grayskull and Snake Mountain are just small potatoes to this massive playset.

Property: G.I. Joe
Awesome Special Feature: Bull Horn
By: Hasbro
At seven and a half feet it was a breathtaking site. With that alone, nothing will ever top the U.S.S. Flagg. That is unless Hasbro someday creates a Star Destroyer play set the same from Star Wars. No play set/ vehicle ever encompassed more of a toy line than this one. Vehicles could land and take off from it. All your action figures were needed to man it. It is the pinnacle of fan’s collection and in a word, perfect. Yo Joe!