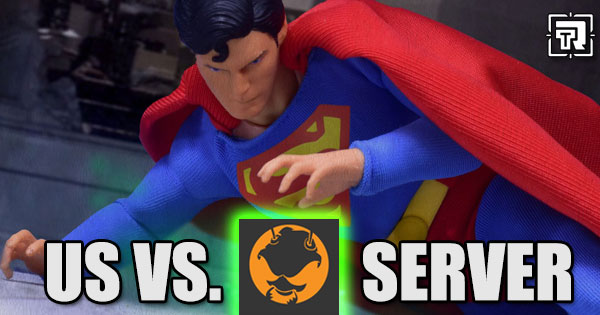 US vs. Mezco Toyz Server - Obtaining Superman (1978 Edition) One:12 Collective

Yesterday, June 12th, was Superman Day 2020. For this special day in pop culture Mezco Toyz, one of our favorite companies, released preorders for their Superman - 1978 Edition One:12 Collective figure. This figure bears an incredible likeness to Christopher Reeve's Superman. So it was a must-have for many fans yesterday. We acquired one for each of our staff members here, after a long and stressful 40 minutes. Yes, we were online for 40 minutes, trying to buy a toy. Why did we do this? Because, one, we had to have this figure. The second reason is that we prefer to get the release at its initial cost, $125.00, and not pay secondary market prices. Which for something like a Christopher Reeve Superman is only going to go up, up, up and away. We documented our time trying to acquire one, briefly (below), however, this morning we were tagged on Twitter by @nerdyscoundrel1. He posted a twenty-minute Vlog on his on his ordeal with trying to obtain one. He perfectly captured the reason why we do this and issues the Mezco Toyz server has. Why won't the company fix this?

As of 10:12 AM (EST), on Saturday June 12th, Superman was still available for preorder!

Nerdyscoundrel makes some interesting points in his Vlog:

Watch as I freak out, sweat, and almost have a heart attack trying to preorder the @mezcotoyz #christopherreeves #one12collective #superman #preorder. 🦸🏻‍♂️

Here is Mezco's own post about the release, however, read the comments and the issues are a real problem for everyone (look at the comments).

One:12 Collective Superman-1978 Edition is now up for preorder. #SuperMan